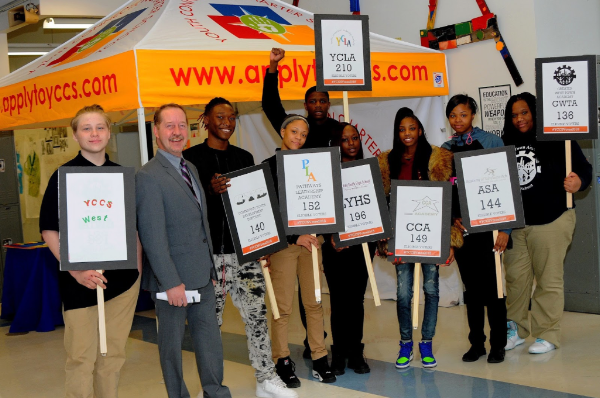 Raising the Bar, The Navigator

The Youth Connection Charter School (YCCS) has challenged its more than 4,000 student population to become more civically engaged and to be a part of the growing millennial voting community. As a result of this call to action from Executive Director Sheila Venson, YCCS launched the Civic Engagement Challenge. Out of this program, a group of students dubbed the Global Majority Youth Rising (GMYR), led the charge and hosted a successful youth-driven Gubernatorial Forum and Voting Drive during the 2017-2018 academic school-year.

“This was the best forum I have ever attended,” said Lt. Gubernatorial candidate, Litesa Wallace, shared with a group of blushing GMYR students. With only 3 percent of millennial voter turnout in the last election, this event marked a significant shift in youth engagement regarding voter participation.

A major highlight of this event included a voter registration drive that targeted the hundreds of potential student voters among the YCCS network’s 19 campuses. Student representatives announced their campuses’ achievement in registering student voters. With placards in-hand, each campus proudly displayed the number of registrants they were able to secure. “Youth Connection Leadership Academy…210!” , “Latino Youth High School…196!”, As the announcements rang out the unwavering peer support filled the room as all the students shouted in harmony “We Vote!”. A credit to the YCCS organization, in total the voter drive registered over 1,400 new voters. The GMYR efforts to garner new voter registrants will continue into the summer expanding into the communities surrounding its 19 campuses throughout Chicago’s south and west sides.